The American Kennel Club has outlined the Clumber Spaniel’s breed standard as follows: 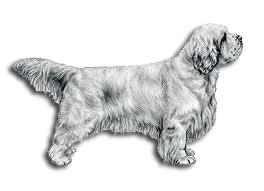 The Clumber Spaniel is a long, low, substantial dog. His heavy brow, deep chest, straight forelegs, powerful hindquarters, massive bone and good feet all give him the power and endurance to move through dense underbrush in pursuit of game. His white coat enables him to be seen by the hunter as he works within gun range. His stature is dignified, his expression pensive, but at the same time he shows great enthusiasm for work and play.

The head is massive with a marked stop and heavy brow. The top skull is flat with a pronounced occiput. A slight furrow runs between the eyes and up through the center of the skull. The muzzle is broad and deep to facilitate retrieving many species of game. The nose is large, square and colored shades of brown, which include beige, rose and cherry. The flews of the upper jaw are strongly developed and overlap the lower jaw to give a square look when viewed from the side. A scissors bite is preferred. The eyes are dark amber in color, large, soft in expression, and deep set in either a diamond shaped rim or a rim with a “V” on the bottom and a curve on the top. Some haw may show but excessive haw is undesirable. Prominent or round shaped eyes are to be penalized. Excessive tearing or evidence of entropion or ectropion is to be penalized. Ears are broad on top with thick ear leather. The ears are triangular in shape with a rounded lower edge, set low and attached to the skull at approximately eye level.

The Clumber should have a long neck with some slackness of throat or presence of dewlap not to be faulted. The neck is strong and muscular, fitting into a well laid back shoulder. The back is straight, firm, long and level. The brisket is deep and the ribs well sprung. The chest is deep and wide. The loin arches slightly. The tail is well feathered and set on just below the line of back; its trimming minimal, serving to tidy the feathering to allow for a natural appearance and outline. The tail is normally carried level with the topline or slightly elevated, never down between the rear legs. The tail may be docked or left natural, both being of equal value. If docked, the tail’s length should be in keeping with the overall proportion of the adult dog. If natural, the tailbone should extend to the point of hock, but should not extend to the ground.

The Clumber shoulder is well laid back. The upper arm is of sufficient length to place the elbow under the highest point of the shoulder. The forelegs are short, straight and heavy in bone, with elbows held close to the body. Pasterns are strong and only slightly sloped. The front feet are large, compact and have thick pads that act as shock absorbers. Removal of dewclaws is optional.

The thighs are heavily muscled and, when viewed from behind, the rear is round and broad. The stifle shows good functional angulation, and hock to heel is short and perpendicular to the ground. Lack of angulation is objectionable. The rear feet are not as large or as round as on the front feet but compact, with thick pads and are of substantial size.

The body coat is dense, straight and flat. It is of good weather resistant texture, which is soft to the touch, not harsh. Ears are slightly feathered with straight hair. Feathering on the legs and belly is moderate. The Clumber has a good neck frill and on no condition should his throat be shaved. Evidence of shaving is to be penalized. The hair on the feet should be trimmed neatly to show their natural outline and for utility in the field. The rear legs may be trimmed up to the point of the hock. Tail feathering may be tidied. Trimming of whiskers is optional.

The Clumber is primarily a white dog with lemon color or orange color markings. Markings are frequently seen on one or both ears and the face. Facial markings include color around one or both eyes, freckling on the muzzle and a spot on top of the head. A head with lemon/orange markings and an all-white head are of equal value. Freckles on the legs and/or a spot near the root of the tail are also frequently seen and acceptable. The body should have as few markings as possible.

The Clumber moves easily and freely with good reach in front and strong drive from behind, neither crossing over nor elbowing out. The hocks drive in a straight line without rocking or twisting. Because of his wide body and short legs he tends to roll slightly. The proper Clumber roll occurs when the dog, with the correct proportion, reaches forward with the rear leg toward the centerline of travel and rotates the hip downward while the back remains level and straight. The gait is comfortable and can be maintained at a steady trot for a day of work in the field without exhaustion.

The Clumber Spaniel is a gentle, loyal and affectionate dog. He possesses an intrinsic desire to please. An intelligent and independent thinker, he displays determination and a strong sense of purpose while at work. A dog of dignity, the Clumber Spaniel may sometimes seem aloof with people unknown to him, but in time he will display his playful and loving nature. The Clumber Spaniel should never be hostile or aggressive; neither is acceptable and should not be condoned. For more information about Clumber Spaniels, please visit the following sites:

If you have any questions about reputable Clumber Spaniel breeders or the breed standards and Clumber Spaniel temperament contact us at dbright@paradiseclumberspaniels.com .